Welcome to the first National BMXNZ Newsletter, we hope to have these out every two months and encourage clubs to submit stories, news and race reports in here to keep NZ BMX community up to date in our news and events.

The build-up to the first test for the senior test teams is very short being that the team is only selected 5 weeks prior. Dave Kidd (coach) was relying on the fact that these trials were top quality and riders had to compete at such high level to secure a spot in the team. The other pleasing factor was that 6 out the 8 members had all been Mighty 11’s so were familiar with the test racing format and intensity.

We managed to get together once prior to Labour weekend which we used to look at rider strengths and weaknesses and start to develop some strategies for racing.

We knew from the beginning it was going to be a tight contest. The girls got off to a terrific start with the outstanding duo of Rebecca Petch (TA) and Zoe Fleming (PAK) taking out 1st and 2nd this allowed the two younger riders Amy Martin (HB) and Jordan Donaldson (NH) to worry about defense and stopping the Aussies getting through to the front. The girls continued like this for their entire 5 motos. Rebecca captained the team by showing them how it’s done and winning all five motos.

The senior boys knew the concept of the race and that they would have to ride as a team and tactically to secure the points required to pull off the win. Everything the boys had practiced they managed to execute at race time. The captain Bayleigh Rees (Pak) rode exceptional race lines in the corners splitting the pack with his team mates Lewis Smith (GS) Maynard Peel (SC) and Clay Merito (TA) riding strong and confident, The racing was hard and fast but, the Kiwis setting the tone in the first moto on Saturday by finishing first, second, third and fourth.

It was a fantastic weekend the track and facilities were awesome. The team bonded well and it was a positive experience for everyone. The teams are now looking forward to racing in Nerang in January 2014, we are well aware that the Australians are fantastic athletes and will come out fighting on their side of the ditch.

The hard work in personal training, racing at race meets and intensive training sessions with Coach Clive Telford culminated in another terrific Mighty 11 test series against Australia in Te Awamutu at Labour Weekend.

The Australian Boys team lost their #2 rider, Jack Davis, to injury the weekend prior to North’s & Oliver Moran #5 joined the team early in the week. Jack was discharged from hospital in time to join his team to support his fellow riders. It was great to see Jack at the track after all he had been through.

With the 2 World 1 plates of Cailen Calkin (Hamilton) & Ryan Martin (Cambridge), it was always going to be a huge challenge for Aussie to beat these boys, but not impossible. Gaining 1st & 2nd places in each test, Cailen & Ryan gave the NZ Boys team a huge advantage with Tasman Wakelin (Nelson) & Zach Paterson (Rotorua) using their team tactics to mix it with the Aussies to continue gaining points.

The North Island BMX Championships were held over Labour Weekend at the Te Awamutu track, hosted by the Waikato Region.

They were a great success, especially with the weather forecast looking particularly nasty but were so lucky to get the weather that Te Awamutu ended up with, and very little of the traditional winds that the Te Awamutu track often has blasting through the track were evident this weekend!

The track was in pristine condition and the club worked very hard all weekend to keep it that way. Unbelievable there were races with multiple World ranked riders in them which was amazing. When the World Champions did their lap of honor it was a surreal moment to see all of the New Zealand talent in one place. And as seen the photo below the photo of many of the World’s finalist, all who now ride with a World plate, it was even more amazing.

The Test team yet again did themselves proud producing some amazing racing. Winning 3 out of the four battles with both senior teams winning and the Kiwi Boys Mighty 11s with no less that two word champions taking the win. The girls however were narrowly beaten but shown great heart and racing during the weekend!

Stand out performances of the weekend must go to Michael Bias (North Harbour) taking out the Elite Men’s Title with Daniel Franks (North Avon) in 2nd and Cody Stevens (Tauranga) in 3rd place with some fast and furious action being seen here. In the Junior Men’s class it was all talented teenager Christchurch City’s Caleb Martin taking out the top spot and Luke Roguski (Tauranga) in 2nd place and Whangarei’s Donald Ross to the take the 3rd spot.

Super class on day two was action packed with Daniel Franks from North Avon taking the win over New Plymouth rider Jayden Davey and Tauranga's Luke Roguski rounding off to take the 3 spot. Unlucky rider of the day would be our new Elite Champion Michael Bias who took a heavy fall and knock to the head so had to watch the rest of racing from the sideline .It was great to see reasonably big fields of Men’s Elite riders, when a large contingent of riders were over in the USA chasing UCI country Points at Chula Vista and racing in Florida

Also very sad to see the decline in Ladies racing marred with the changes to the UCI rule changes and injuries at the moment meant there is no National Elite or Junior Women’s Champion in 2013.

In the challenge ranks World Class riders Rico Bearman (10) and Lauchie Stevens McNabb (9) did not disappoint taking out their age groups. As did World Champions Leila WALKER (8) Cambridge, Thomas Tucker 8) Pine River QLD,Adam Coker(17-19 20”) East City, Vanessa Quinn(30-30 Cr) Tauranga, Steve Shimanski (35- 39 Cr)Hawera, all winning there classes. Calin Calkin(11yrs)Hamilton was on fire all weekend and he has been all year not only Captaining the Mighty 11s on two occasions and winning a World championship this year, he also won the Mighty 11s Class without dropping a lap all weekend. An amazing athlete, with a huge future. Also a stand out performer was first time title holder Siobhan Quintal who took out the 17-29yrs 20” class finally rewarding her for many years of hard work and showing some great jumping skills taking on the first jump at Te Awamutu. Rotorua riders had great results once again at this meet and World no. 2 Rider Megan Williams taking out the 9 years girls’ class just ahead of her Rotorua team mate Jenna Hastings who is also World no. 3.ranked rider. Tahlia Hansen took out the double of NI 1 in 16 years 20” and Cr class not dropping a single lap all weekend showing why she has been selected for the High Performance Squad as she looks forward to 2014 as her first year in the Junior Women’s class

Teams’ racing was taken out by YESS NZ Team and Rebel Racing winning their respective classes with close margins.

A huge well done and thanks must go to the Te Awamutu BMX club for this amazing event, its hosting was faultless. 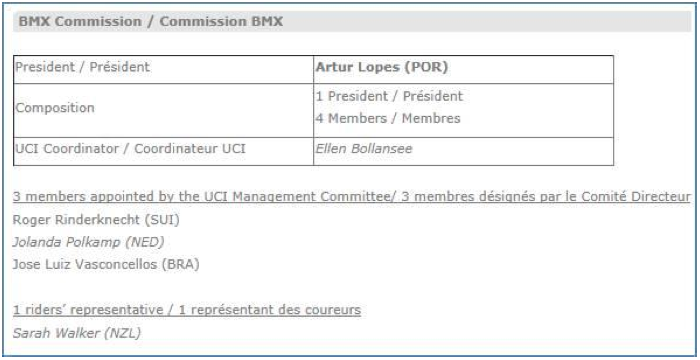 Well done to Sarah Walker to obtain this position on the UCI BMX Commission. Also this is the New UCI president and the UCI management committee. For the up coming year.

To confirm the Age group for Nationals we have had some enquiries about the age groups that will be offered at the 2014 national championships. This was discussed at the last AGM, but we want to ensure that everyone gets the correct message.

The age groups will revert of those that applied at the 2011 (North Harbour) national championships, rather than the UCI age groups that were offered at the 2012 (Rotorua) and 2013 (Cambridge) events. These were the two qualifying events for the Auckland world championships. So, to be clear- we are reverting to the age groups used up until 2011

Over the past few weeks the Rotorua BMX club has made some exciting changes to the track which will ensure rider progression and skill development remains the main aim at the club. A team of hardy workers gathered over a couple of bright and sunny weekends with their rakes and wheelbarrows and changed the shape of the 4th straight. This was a big enough job in itself, but a whole track re-lime and improvements to the pump track were also on the work schedule.

Track Manager Rupert Hastings said “the track changes came about because we want to keep it interesting, especially for those who are progressing through the age groups. It’s also about building confidence, and ensuring we retain as many riders in the sport as possible.”

The club is excited about showing off the new track to its members in the lead up to Christmas and welcomes riders from other clubs to check it out anytime.

SUCCESSES – well done to you all!!!

Kevin Tamepo (centre) with all his trophies from the Turangi Sports Awards 2013 -
Dave Browning – Official of year : Cambridge BMX – Club of year

Next Newsletter will be out around the 1st March 2014 please send your stories, successes, information,news photos in to Caroline Fox at d.foxy@xtra.co.nz.

Have a very Merry Christmas and a Happy New Year from BMXNZ!