It is with much pleasure that we congratulate the successful NZ BMX Test Teams, who trialled in Te Awamutu, Sunday 29th September 2013. 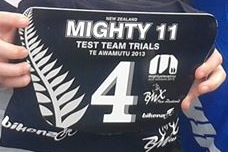 The following test riders will ride as a team against the Australians Test Teams as part of a ‘cultural exchange’, to be held at the North Island BMX Championships, on the Te Awamutu BMX Track, Labour Weekend, 26th and 27th October 2013.

Thank you to BMX NZ for the support in giving these riders the opportunity to represent New Zealand in BMX, and to the Te Awamutu BMX Club who hosted the trials. Thanks to all who assisted this event and most importantly to all who put themselves forward to trial for the teams.