It was a trying second day at the 2015 BMXNZ National Championships for the 11 and under Taupo riders.  Because of the new race format, we only had 5 riders competing on day 2.

Bennett Sargison showed his skill as a sprocket taking out fantastic results in his qualifying motos with 3 2nd placings and a 3rd in his semi finals.  He raced hard in his finals but could not make up ground and settled for NZ 6 in 7 boys being Taupo's only top 8 finisher for day 2. 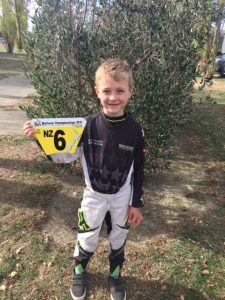 9 Year Girls class was shaping up to be taken out by Zara Ranford with her putting 3 impressive first placings in her qualifying 3 motos.  In the semi finals, Zara battled with Cambridge rider Tia Douglas up till the 2nd corner with Zara holding her line.  It looked as if Zara was to finish 4th, however, she crashed out 5 meters from the finish line thwarting her dash to the finals.

Out of a field of 61 riders in 9 Year Boys, Taupo had two riders representing: Ezra Philips and Declan Weal.  Declan Weal rode hard and fast in his first moto of the day coming in a deserved 2nd.  In Declan's 2nd moto, He touched bars with another rider just out of the first corner and they both went down.  Declan picked himself up and finished in 6th place.  His 3rd moto resulted in a 4th meaning that he could slip through to semis with his points - Declan finished 8th in his semi final.

Christchurch City's BMX Track was not to be Ezra Philips' favourite with him not making it through to semis.  Ezra still rode well and he had a lot of fun doing it, and kept smiling throughout the day!

Abby Hirst rode in 11 Girls and had a great run in her first three motos with fantastic racing.  Abby took away two 4th places and then a 3rd before moving into her semi final where she settled for 6th place.

Michael Ranford was awarded National Series Champion for 11-12 Cruiser (Mixed) with 150 points and his sister Zara was placed 4th in the National Series in 9 Year Girls. 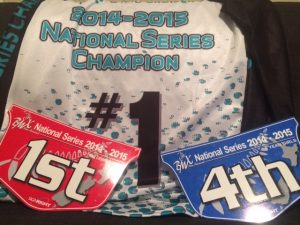