Charlie’s at top of her game

THE past year has been a whirl­wind ride for a 12-year-old BMX biker who has already secured an NZ1 ranking.

Charlie Lester-Rosson said her success was "quite unexpected and it happened quite fast".

Since Charlie started competing on the national circuit last year she's represented New Zealand three times, been selected for the Mighty 11 team, come third at Nationals 2013 and first at Nationals 2014.

She also just received the news she had been selected to be part of the PURE black team.

This selection will see her train with some of the top NZ1 riders, which Charlie said had been a dream since she started BMX. 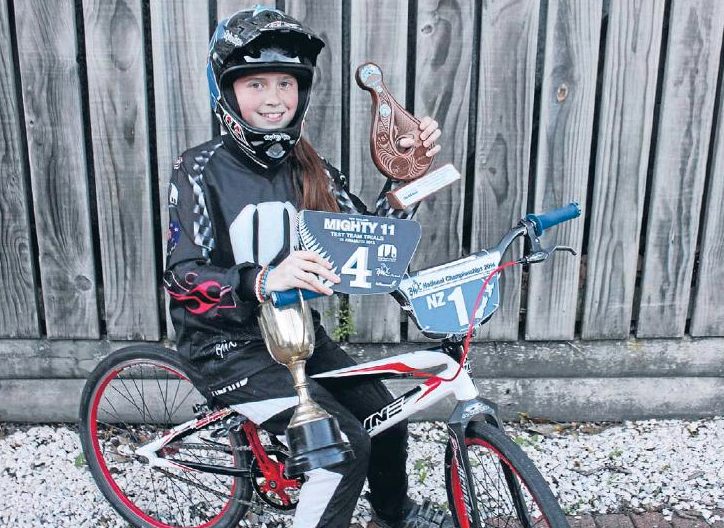 Mum Rachel Lester said Charlie had been riding at the Taupo BMX club since she was eight and had been doing it just for fun until one of the dads approached her mum.

"He said did I know she was a good rider and I said no not really so he encouraged me to put Charlie on the national circuit."

As soon as she entered the cir­cuit she won her first four races and qualified for the Worlds com­petition in 2013 which as luck would have it was held in New Zealand.

However, she didn't make it to the semi-finals at Worlds which Charlie said had been upsetting but she had learned from the experience.

"I only got stronger from then on. It was quite hard and I was quite put off by the amount of people there were there."

But as it will be held in Amster­dam she will only be able to attend if she can raise enough money.

Her NZ1 ranking is also special, with Charlie being the only Taupo female to gain a NZ1 title and the only person from the region to win at Nationals 2014*.

So far her trophy collection includes six trophies and 12 number plates. She hopes for more.

At last year's Sport Waikato Awards while Charlie was too young to be eligible for an award her achievements saw her get a special mention.

Charlie said she would like to thank Kevin Tamepo for his coaching help and also thanks her mum for being her "inspiration".

* For clarification:  There have been two other females who have secured NZ1 titles from Taupo BMX Club.  Charlie's achievement takes the number of female NZ1 titles for Taupo BMX riders to 5. Charlie is the only female Taupo BMX rider to make the Mighty 11's. Taupo is part of Central Region BMX and we acknowledge that there were other Nationals winners in our region.  This article was not written by Taupo BMX Club.
For reference: Taupo BMX Club Honours Board:  https://taupobmx.org.nz/taupo-bmx-club-honours-board.html