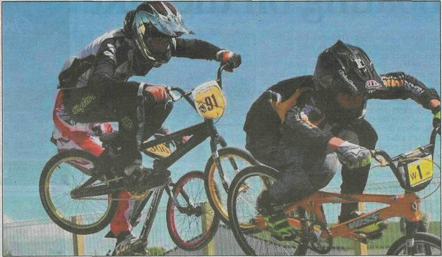 Mark's no stranger to international riding after being a member of the New Zealand Mighty lis BMX team when he was 11 years old, and after riding in the BMX World Championships in Auckland last year.  He was selected for the senior test team after qualifying second in his field trials at the pre-North Island championships in Auckland two weeks ago, beating other riders a year older than him.

The test team consists of two 14-year-olds and two 15-year-old riders and they race as a team against the four-strong Australian team. Mark, who has been riding since he was six, says he loves BMX for the thrill.

"It's exciting, anything happens and it's good. I like those kind of sports."

The races are short (typically around 45 seconds for the fastest riders) but intense and Mark says racing as a team is quite different from individual racing.  The riders have to work together to let the fastest two riders break ahead.

"You've got to block everyone out... you're working as a team so you have to be tactical... if you can stack someone up on a corner, you'll have to do it."

The races in Auckland this weekend will be followed up by races in Nerang, Queensland, in December.

Taupo BMX Club member Steve Amrein, who along with Kevin Tamepo has coached Mark over the years, says it's a huge achievement for the young rider to be named to the New Zealand team.  "He's a really determined kid, full of aggression," says Steve.