Well done to all riders from Taupo BMX Club who raced at the 2017 First BMXNZ National Championships over the very wet and wild Easter weekend in Te Awamutu.

Ezra had 29 other riders in his trial and despite riding hard, did not make it through to the finals.

Zara took two motos to find her mojo, and made it through to the finals where she finished in sixth place after a bad gate saw her at the end of the pack down the ramp.

Well done to you both for giving it your best!

Friday was also host to the 13 and over 20” racing. While the weather was forecasted to be partially nasty, the sky stayed clear and the track was fast due to the hard work that the Te Awamutu track team had put into keeping it in top notch condition.

Tariq had a fall in his first Moto in which he opened up his elbow. This meant he missed his second moto. While he finished the remaining three, that was not enough to see him through to finals. Abby and Matthew rode well in their motos, with Michael having a great day till his semi final where he finished 5th after a hard moto. Jono was on form all day and was our only podium for Friday, talking out NZ 3!

Saturday was the 12 and under 20” racing with the UCI Championships in the mix. This was well represented in the Men Juniors with Mark Harland-Croft and Logan Hirst racing. Mark proved he was up there with the best taking out a podium spot in 3rd behind world champion Maynard Peel and Ryan Jordan, while Logan was just a couple of spots behind finishing in 6th.

The rain came in waves and turned the already soggy grounds into mud, mud and more mud, which was perfect for the age group racing on Saturday.

The younger riders all performed well - for many of them, this was their first taste of a Nationals or a major meet. It was great to see them all have fun and race hard.

Finn made it through the day to get into semis for the 6 boys where he finished 5th giving him the rank of NZ 10. Kahlia looked to be enjoying herself in the mud after her day finished early in 13th place. Hunter and Matthew raced in 8 boys while Zavier and Bennett were going hard in 9 boys. Bennett raced hard all day and settled for NZ 4. In the 10 boys, Daniel and Angus were racing. Daniel had a great 3rd moto, coming third, while Angus had a blinder of a day battling though quarter finals to finish 5th in his semi final, which left him with NZ 10. Zara and Ezra were up again in their respective 11 year classes. Ezra was unfortunate that he did not progress past quarters. Zara rode well, but missed out on the finals by one spot in her semi despite a strong third and fourth straight.

On to the last day of the 2017 BMXNZ Championships. Wow - what a day for the weather. Intense rain meant the call was made to shorten the day to just 2 motos and a final - while this did not seem fair for some of the riders, it was the best call to make because of the weather. There was that much rain that Te Awamutu BMX Club had pumps pumping the water out of the drains so that the water would clear off the track.

The cruisers raced in-between down pours. Everyone rode their best and Taupo ended up with 5 top 8 finishers out of 8 riders, not shabby considering the revised format. The riders to luck out were Matt Harvey and Matt Collins - both of who were considered a shoo-in to top 8!

Taupo’s Golden Girl of Nationals had to be Kylie Sargison - Taking out NZ 1 with a clean streak of all firsts in all motos. Well done Kylie. That is Taupo’s first NZ 1 since Tauranga in 2013.

A first for Nationals was the SuperNats. SuperNats is a superclass designed for the 20” riders from 9+ to have a race for some cash! Mark, Logan and Jono all took part in this mega race with a huge class of 15+ age group. Jono held his own, but was no match for the elite riders that he was pitted against. Logan missed out on the B final by one point and it was up to Mark to have a crack. He finished 11th in the SuperNats which was lucky for him as payout was to 11th place!

All in all, an enjoyable muddy wet weekend was had by all riders, not just from Taupo! Big thumbs up to Te Awamutu club for showing New Zealand just what can be achieved with team work and dedication. Thanks to all the volunteers and of course the BMXNZ team and officials! 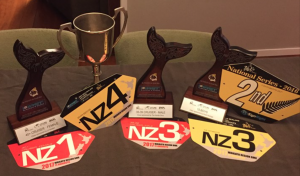 The Sargisons haul from the 2017 BMXNZ Nationals